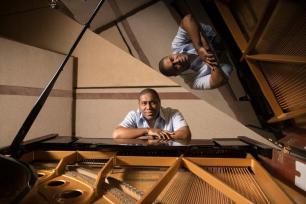 Pianist, Composer and arranger. At age of eight, his career began in classical piano at the Vocational School of Arts "Olga Alonso" in his hometown, Santa Clara, Cuba. However, his first contact with the music was at 3 years through his father Guillermo Paredes, percussionist at Modern Music Orchestra of Santa Clara, who taught him about the various rhythms and Afro-Cuban styles.

In 1991 he graduated with honors from the National School of Arts (ENA) in Havana. He then joins the Orchestra América, which allowed him to travel to Venezuela; when he returned, he joined the jazz group of Bobby Carcassés and then the Orchestra of Maestro "Enrique Jorrín" (the creator of Cha-Cha-Cha) with whom he had the opportunity to get to Mexico in 1992.

At this stage of 11 years of work in Mexico, he shared the stage with musicians like Israel "Cachao" López, Jerry Gonzalez, Celio González, Diego "El Cigala", "Patato" Valdés.

His move to America was in 2003 to the city of Boston and since then has worked and/or recorded with artists like Richard Bona, Jeff "Tain" Watts, Giovanni Hidalgo, Roy Hargrove, Arturo Sandoval, Jane Bunett, Issac Delgado, among many others.

Since 2007 he resides in New York City, where he is the leader of his own jazz group and works with other projects at the same time like Richard Bona and Mandekan Cubano, Yosvany Terry Quintet.

He has also toured in South America, Europe, the USA, Africa, Australia, Asia, appearing in the most important clubs and jazz festivals.

He has to his credit 3 albums as a leader: "Osmany Paredes With Menduvia", "Passages" and "Trio Time".