St. John's in the Village 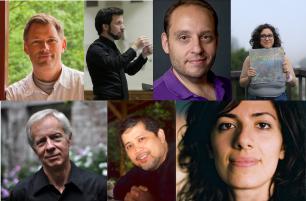 C4 is holding an open dress rehearsal for their upcoming choral concert, "Babel." "Babel" features songs in multiple languages about the struggle to communicate. C4 will premiere six pieces, including Brian Mountford's piece "Lest We Be Scattered" and Alexander Boostrom's "Of One Voice," both of which center around the biblical story of the Tower of Babel. Another world premiere comes from composer Bruce Saylor, which focuses on the Syrian diaspora and utilizes texts from ancient and contemporary Arab poets. Chino Toledo's rousing piece "Sitsit Digidong" includes both Tagalog and nonsense syllables in a highly rhythmic and energetic celebration of language and sound. Also on the program: "L'ours Réglisse et le sac à malices," (Bushra El-Turk), "A Serious and Pathetical Contemplation" (Mario Gullo), and "Jamais d'autre que toi" (Leah Ofman), all of which are world premieres.