Harriet Tubman: When I Crossed That Line to Freedom

American Opera Projects presents the world premiere of Harriet Tubman: When I Crossed That Line to Freedom, a two act folk opera by Nkeiru Okoye, which tells how a young girl born in slavery becomes Harriet Tubman, the legendary Underground Railroad conductor. Based on recent Tubman biographies, the story is narrated and told in the context of Tubman's tight-knit family of lively characters. Harriet Tubman carries the universal themes of sisterhood, courage, sacrifice and doing what is necessary to keep a family together. Moreover it is a heartwarming tale of two sisters vowing that nothing but death will separate them, despite the slavery threatening to tear them apart. Featuring a string quintet from the Harlem Chamber Players, the music director is Mila Henry and the stage director is Beth Greenberg. 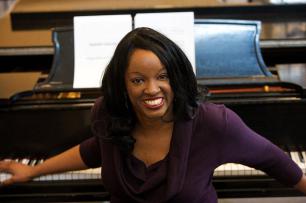 used with permission of Voice of America