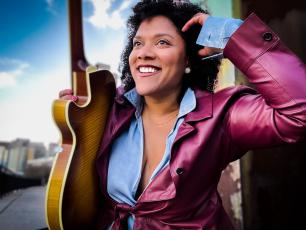 The Lolivone de la Rosa Organ Quartet featuring Brian Charette (organ), Ned Goold (tenor sax), Juan Chiavassa (drums) is heading to the studio in 2023 to record their debut album as a group! Please join us in a unique pre album recording performance and be the very first ones to listen to the unreleased originals by de la Rosa, Charette and Goold along with standards by Joe Henderson and Carla Bley that will be included in the record. Listen to "PB & J"; a tribute to Peter Bernstein by Lolivone de la Rosa performed by the quartet at the Berklee Performance Center in Aug 15, 2022 here.

Lolivone de la Rosa (July 7, 1993) is a guitarist, composer, producer and educator from Puerto Rico based in New York City since June 2021. Although de la Rosa is new to the NYC jazz scene, she has been making a reputable name for herself as a reliable sideperson and strong bandleader. She carries, with humility and charisma, the attitude of a rising star that is attributed important contributions to the NYC jazz scene as a jazz guitarist. Rodney Jones mentioned: "The future of jazz guitar is in good hands with this amazing, gifted, young woman." She has performed in important venues such as Jazz at Lincoln Center, as part of Seton Hawkins' Blues Workshop and Birdland Jazz Club, as part of Frank Vignola's Sadowsky Guitar Night. De la Rosa also leads a residency at Casa Mezcal NYC where she has been performing on a weekly basis for more than a year. Her series has featured a stellar lineup including Brian Charette, John Benítez, Ned Goold, Pat Bianchi, Pablo Menares, Juan Chiavassa, Alvaro Benavides, Akiko Tsuruga, Dan Martínez, Edsel Gómez and many more. She has also shared the stage with her mentor Terri Lyne Carrington, Steve Cardenas, Paquito D' Rivera and Pedrito Martínez to name a few.

In Fall of  2 22022, de las was asked to join the NYU Clive Davis Institute Faculty - where she teaches Music Theory. She has also been part of the Berklee Guitar Sessions Faculty. De la Rosa is currently the Program Manager of the Next Jazz Legacy: a program that supports emerging women and non-binary artists in jazz under the Artistic Directorship of Terri Lyne Carrington. De la Rosa has been a trusted panelist for the following non-profits: MAP Fund (NY), MidAtlantic Arts (MD) and Charlotte Street (MO).