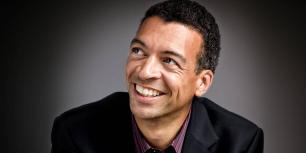 Roderick Williams is one of today's most sought-after baritones and is in constant demand on the concert platform and in recital, encompassing a repertoire from the baroque to world premieres. In 2016, in his native Britain, he won the prestigious Royal Philharmonic Society's Singer of the Year award. At the world's leading opera houses, with the most prominent symphony orchestras, and in the major concert venues, Roderick Williams has been hailed for the beauty of his voice and his exquisite musicality.

A prominent international soloist in his teenage years, Ken Noda gave up a successful career as a touring artist for his love of opera. He became a principal at the Metropolitan Opera, first as an assistant to James Levine and then as Musical Advisor to the Lindemann Young Artist Development Program. He performs as a collaborative artist with many of the world's leading singers.

Caroline Shaw: how do I find you

Christopher Hoag: The Pros and Cons

Gerald Finzi: I Said to Love

Benjamin Britten: Tell me the Truth about Love