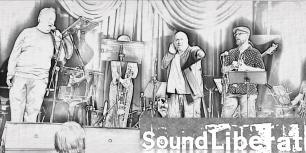 This was the first in-studio recording Sound Liberation did after the pandemic lockdowns were lifted. The concert will also include new music such as the premiere of the song 'Outside' featuring singer David Banks. The event will also include compositions from their past albums with opera singers Adriana Valdes and Charles Coleman, and poets Erik T. Johnson & Robert C. Ford and other surprises.