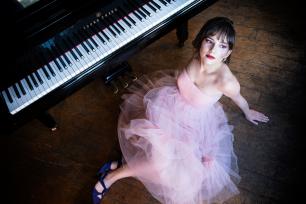 "Turkish pianist, keyboard player, composer and arranger Bilge Günaydın showcases her talents on Daydreams, her debut release. It's an impressive first outing for the young musician—stylistically wide-ranging, moving from laid-back melody to drama and mystery, and beautifully performed by the musicians."

Bruce Lindsay - All About Jazz

"--The main reason is the evocative pulling-power of Bilge's compositions. They charm the listener with quirky harmonic turns, melodic imagination and variety in the arrangements."

Francesco Martinelli - All About Jazz

Bilge Günaydın is a Turkish jazz pianist and composer who lives in New York. Her debut album called "Daydreams" in quintet form was released by Turkish Label Ada Music and Japanese Label Inpartmaint digitally and as CD in 2020. All arrangements, compositions and productions belong to pianist Bilge Günaydın. She played this album project with her band at Ankara Jazz Festival and Istanbul International Jazz Festival. Also, she is excited for her second album that will be released at the top of 2022. She continues her master's study in jazz composition with Bill Charlap, Cecil Bridgewater and Peter Mcguinness at William Paterson University in New Jersey.

She will perform her originals from her debut and upcoming albums with her quintet at this concert.